Northern Red Sea diving appeals to divers of all levels of ability and with different interests. With a diverse variety of sites this area is appealing to all divers.

The Sinai Peninsula is a mountainous region which often seems mirrored underwater with monumental drop off’s, dramatic vertical walls and canyons.  Located on a major shipping route these waters are known as the gateway between Europe and Africa.  Many ships have sailed their last voyage in this area.  The Northern Red Sea has some of the most impressive wrecks in the world including the Rosalie Moller and the SS Thistlegorm.

In addition there are world class reef dives with dramatic walls and fast currents.  Ras Mohammed National Park is at the very most southerly tip of the Sinai – The Straits of Tiran a short distance away – both are home to spectacular reef dives. 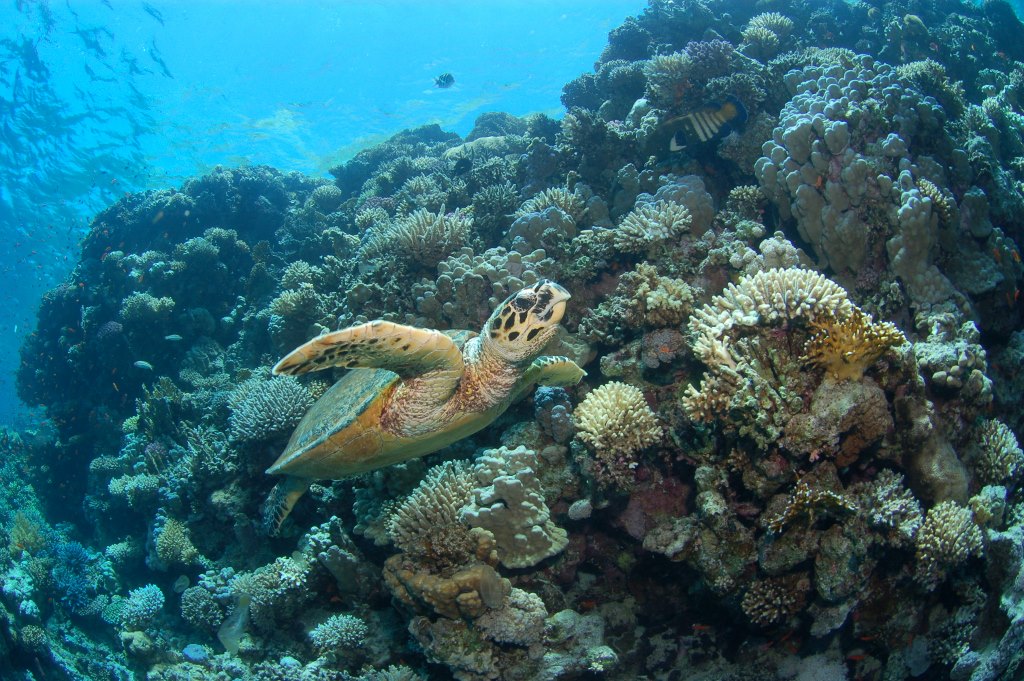 The straits are formed by the island of Tiran to the east and the Sinai coastline to the west.  The meeting of deep waters; continental plate,;and narrow passage creates a bottleneck.  A strong dense flow of plankton is funneled to the coral reefs through the bottleneck.

A food chain is set in motion which links the plankton; coral organisms; and reef fish to the larger fish – the sharks!

Seasonally – weather and sea conditions permitting, a dive may be done in the deep blue water to search for schooling hammerheads.

The four main dive sites in Tiran are: Gordon; Thomas; Woodhouse; and Jackson. These reefs are named after the English Cartographers who drew the first nautical maps of the region. The reefs offer both diverse marine life and amazing topography.

Ras Mohammed National Park is located at the most southerly point of the Sinai  peninsula which separates the Gulf of Suez and the Gulf of Aqaba.

Shark Reef and Yolanda is the most impressive dive in the national park.   These are stunning reefs with a vertical wall descending to in excess of 800m, strong currents and huge schools of fish.

The wreck of the Yolanda is too deep for recreational divers to visit.  The cargo of ideal standard toilets, baths and a BMW car are at shollower depths that are easily within recreational diving limits.  During the summer vast numbers of snappers; barracuda; and bat fish school in the blue water in front of Shark reef with oceanic black tip sharks moving majestically between.

Other sites in the park should not be ignored as with hundreds of coral species and marine life  unique to the park the dives are truly special.

The Northern Red Sea is a major shipping channel. With it’s many wrecks it is a wreck divers paradise.

The most famous wrecks are the SS Thistlegorm and the wrecks of Abu Nuhas but there are many more lesser known wrecks that offer equally great dives.

The Rosalie Moller was sunk the day after the SS Thistlegorm.  When the Thistlegorm was his her explosion lit  up the light sky and gave away her postion.  Slightly deeper than the other wrecks in the region she can be a challenging dive.

The Ulysees is home to uncountable nudibranchs and is popular with wreck and reef fanatics alike.

Whether you view as artificial reefs or the metal of the wreck the northern wrecks are simply amazing!

Heavey on the Metal