The Southern Red Sea scuba diving is known for it’s more remote reefs.  With slightly warmer water temperatures than in the north it is more common to see shark action. Oceanic white tip sharks are known for their love of oceanic waters.  As the Southern Red Sea reefs are in close proximity to very deep waters sightings are frequent.

Aside from the pelagic marine life the southern Red Sea has a lot to offer.  There are a number of deep wrecks that are are rich in history and life.  The coral reefs are still very unspoilt and are vibrant in colour. 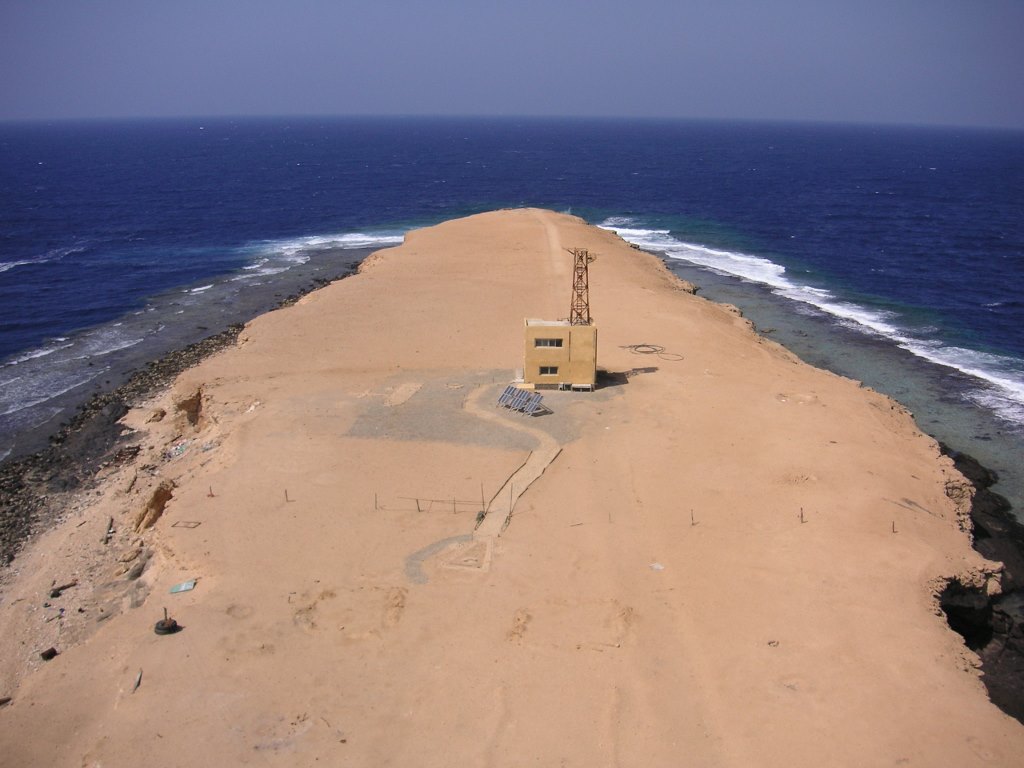 Big Brother is easily recognized by its lighthouse.  The lighthouse was  built by the British in 1880. It stands 31 meters high and is the only landmark on the barren rectangle-shaped island. The bleak appearance of the island itself is a stark contrast to the beauty underneath the surface.

A fringing reef drops off around the island.  The NE side has sheer walls covered with corals and gigantic sea fans.  A cave jammed with thousands of glassfish is well worth exploring.

Two spectacular wrecks – Numidia and Aida are found on Big Brother. The Numidia lays on the north side and is well preserved laying in one piece apart from the top and mid sections.. This wreck is simply covered in vividly coloured soft corals.

Egyptian troop carrier – Aida II – sank in 1957 in the process of securing its mooring. Its wreckage now lies scattered in a few meters of water along with the engine. The main section which is still pretty much intact, rests between 30 – 60 meters.

Little Brother is a tiny round island ranked by many as one of the world’s best dive sites.  Shark sightings are more or less guaranteed.

Large plateaus on the north and south ends of the Island make the topography seem very spread out.  The walls are simply breath taking with soft corals, sea fans and fish everywhere!  Fish usually range from millions of orange anithias to snappers, tuna barracuda and trigger fish.  Whale sharks and manta rays can also be seen at certain times of the year. 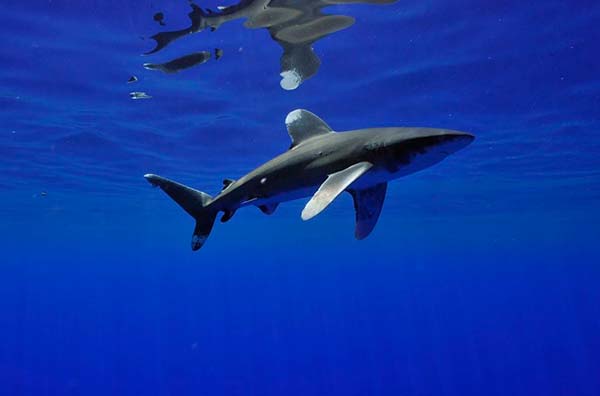 Daedelus Reef is almost round and reaches approximately 500 m at the widest point. Another lighthouse built by the British in the 19th century stands in the middle of the island and is the only reference point for miles.

Its spectacular sheer walls are equally as good as the Brothers Islands, carpeted in soft corals, hard corals and enormous sea fans. The vertical walls drop away quite steeply on all sides with the exception of the South where we find a beautiful plateau instead which is between 30 and 40 meters. The East wall is exceptionally sheer with spectacular caves and overhangs where large groupers are frequently encountered. There are more exquisite corals to be found on the West wall including some predominant hard coral formations.

Expect to see barracuda, jacks, tuna, rainbow runners, grey reef sharks and hammerheads. Threshers and dolphins can also be seen on occasions as can mantas and whale sharks. A large field of beautiful anemones and clown fish easily ranks with Anemone City at Ras Mohamed. Turtles are sometimes seen and you can bump into the occasional grey reef sharks and resident thresher sharks. Some of the hard coral is awesome and the underwater scenery is just as spectacular as Little Brother.

This peaceful marine park island is located just 5 1/2 km from Rocky Island and 46 km southeast of Ras Banas. Zabargad is the largest island for miles around covering a triangle of 5 km squared.

The ancient Pharaohs, Romans and recently, the Egyptians all mined ‘olivine’ (a green mineral) here on this island. Zabargad has good shelter and its beaches attract nesting turtles which are best seen in the month of August.

It is recognized by many to be the most beautiful island for diving with its extensive diversity of fish life ranging from tiny anthias to huge groupers. Morays, turtles and octopus are also seen here as well as numerous other underwater life.

Zabargad boasts a fantastic turquoise lagoon and shallow coral reefs showing off dramatic colours at depths of 18-25 m so the site is often used for night dives. Plenty of invertebrates, such as cuttlefish, squid, and octopus are most active at night when the site takes on an entirely different character.

Stretching out from the southern shore of Zabargad Island is a sandy slope totally covered with an astonishing concentration of coral pinnacles. Each ‘fairytale castle’ pinnacle creates a home for miniature reef fish which appear like big fluffy clouds around the intensely coloured coral. Larger reef fish can be seen cruising through the pinnacles. The sand between the pinnacles supports blue spotted and black spotted stingrays as well as crocodile fish. The pinnacles themselves consist of a wide variety of stony corals. Many of the pinnacles are intricately sculpted. The result is a variation of silhouettes with overhangs, grottos and crevices to explore. Hammerheads and manta rays can sometimes be encountered cruising up and down. There are several wrecks round the mysterious island and most have yet to be identified.

And not just Oceanics….

Dive into the Blue

Deep waters are perfect for that blue water entry.  Free your mind and spirit and book today! 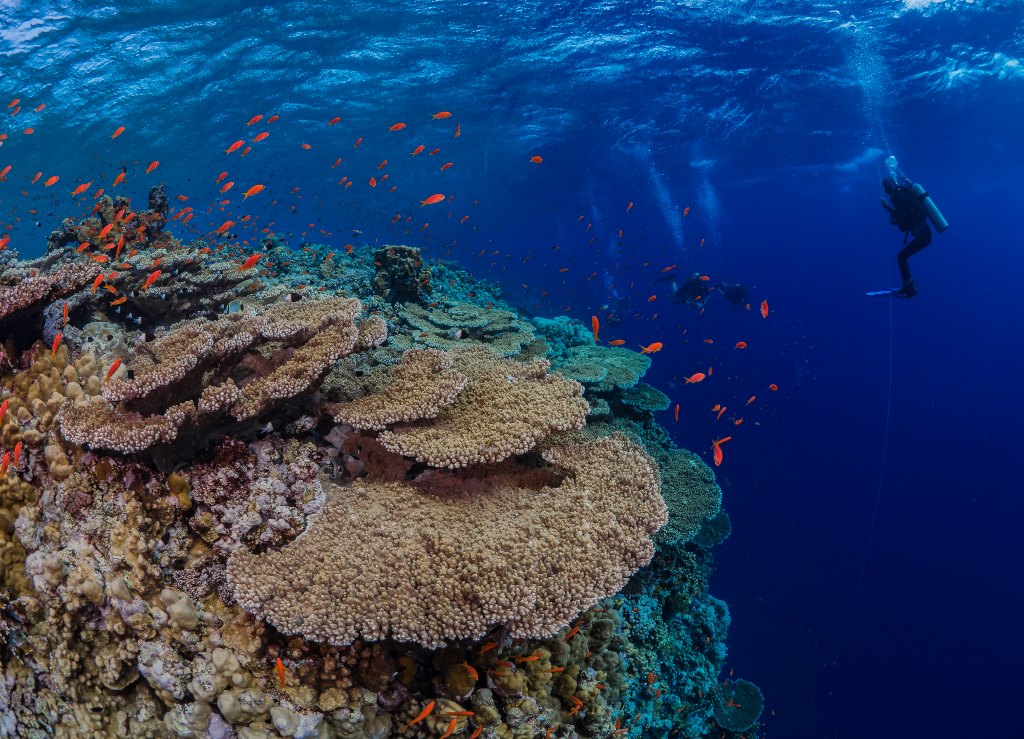 Elphinstone is one of the most frequented dive sites in the Southern Red Sea. It’s a long, narrow reef reaching approximately 300 meters in length. Elphinstone is located 12 km out from Marsa Abu Dabab.

Strong currents and dramatic walls make for some seriously adrenaline charged drifts. This spectacular reef has walls that plunge down to over 70 m.

The North plateau is the place to be and depending on currents can be challenging to reach.  Here you can be surrounded by white tips, grey reefs or even hammerheads.

Thresher sharks can often be seen at the 55m deep archwayon the southern plateau Here lies a large coral encrusted rock which was once thought to be a sarcophagus.

Described as the most adrenaline pumping dive site in the Red Sea, the reef at Rocky Island is shaped almost like a kidney bean and is where many strange and familiar reef fish hang out.

The sheer walls, encrusted in soft corals, sponges, and sea fans, drop sharply from just a few meters below the surface and continue down to the first plateau at 25 m, then again to 50 m and deeper. Tall dangling sea whips sprout from deeper water, while several great caves and overhangs offer a great place to watch the sharks go by.

There is a great deal of shark and pelagic action especially at the southeast corner of the island. The strong currents make for an exciting dive. 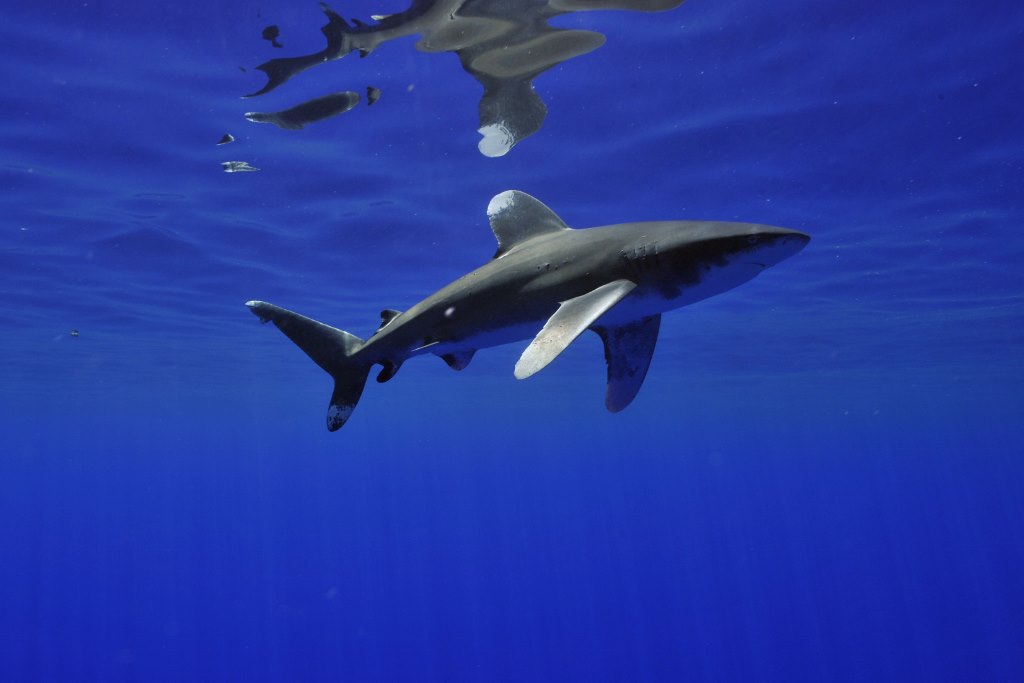 This massive reef system is located furthest south (just 10 miles from the Sudanese border) and is the most remote of southern Egyptian Red Sea sites.

St. Johns stretches 13 m wide and 8 m long. Its reefs rise up from a gigantic underwater plateau hidden in the inky blue water.

There are dozens of excellent dives, some on tiny circular reefs which come to just below the surface such as Four Meter Reef which looks like a quick swim, but once under the water it grows wider and wider.

Turtles are common as are Napoleons and grey reef sharks. Hammerheads and other shark species are possible.

Fury Shoal consists of a large system of reefs growing up from a shallow plateau.

Exploring the caves in the shallow waters is enticing. The main reef plunges down to 14 meters where it meets a sandy plateau sloping very slowly down to 25 meters.

A great spot for sightings of our favourite friends – dolphins.  Guaranteed to put a smile on even the most hardened divers face